This year, there was a glut of strawberry plants in Florida. It happens sometimes, for a variety of reasons. In this case, a frost ruined the staggered growing season, causing a bunch of plants to produce berries all at once. The market was flooded with fruit. When overproduction like this occurs, the result is usually that farmers cannot obtain good prices for their fruit, because everyone is trying to sell their fruit off and dealers have the option of choosing the lowest prices, which drives prices down.

Ultimately, many farmers plowed their plants, fruit and all, right into the ground. Because it was more cost effective to allow their crops to rot than it was to harvest the berries and bring them to market. The only farmers who didn’t do this were the ones with processing facilities for their fruit on site; they could pick the berries and freeze them for future sale, thus achieving prices which were sustainable.

This story, to me, is emblematic of a lot of problems with the food system in the United States, and in many other regions of the world. Situations in which it is more cost effective to allow crops to rot than to harvest them are, unfortunately, not uncommon. In all of the countries where this happens, though, there are people who are hungry. I’m sure that numerous people across the United States who are going to bed with empty stomachs would not turn up their noses at some free strawberries, including people in the areas where these farms are who might have been willing to come out and pick.

Unusable fruit is not always allowed to rot in the fields. Sometimes, it is donated to conservation parks and zoos for animal fodder. This practice extends not just to fruit which is selling so low that it can’t be sold commercially. Perfectly edible fruits and vegetables which are blemished are also given to zoos, because dealers and grocery stores will not buy them. Humans, it appears, have finicky tastes. Meanwhile, animals in captivity enjoy the dietary diversity and nutrition provided in fruits and vegetables which, again, could have gone to feed hungry humans.

Sometimes, food which is safe to eat but not acceptable for sale ends up in food banks, providing at least some people with access to fresh fruits and vegetables which are sometimes of very high quality, but it’s hit and miss. Some weeks, there might be a glut of vegetables, providing lots of options to people. Other weeks, there might be nothing, or people might be offered fruits and vegetables which are pretty marginal, like rubbery carrots and wilting lettuce. Or, food banks are provided with foods which their customers don’t know how to use or don’t like; in a heavily Chinese community, for example, popular Western fruits and vegetables might be greeted with puzzlement.

There are a lot of problems with the way in which food is grown, harvested, processed, and brought to market in this country. All of these problems collectively create some serious systemic issues. For example, in many areas, people cannot obtain fresh food at any price. They live in food deserts where the only stuff which is available is processed, preserved, and packaged. In other areas, fresh food is around, but the prices are too high for people to afford. Meanwhile, farmers are plowing crops of strawberries into the ground because they cannot find anyone to buy them at a sustainable price.

And it’s worth keeping in mind that a ‘sustainable price’ is, itself, questionable. These farmers are not using laborers who are being paid at least minimum wage, working 40 hour weeks, and provided with basic benefits. Many of them use undocumented immigrants at harvest time. These workers work long hours without making even minimum wage, let along getting overtime pay, and they most certainly do not receive benefits. Crops like strawberries are very labour intensive because they are fragile and must be handled manually. They cannot be harvested and processed by machine. That means that farmers need bodies in the fields. 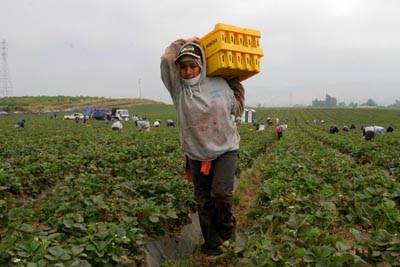 That ‘sustainable’ price for strawberries doesn’t seem so sustainable now, does it? Farm labour is a serious issue in the United States. Workers who attempt to organize will find themselves out of a job and replaced by a new group of workers, people who will not protest their working conditions. Labour in this country is essentially treated as a disposable commodity, in which people are shuffled around like objects instead of human beings, and this feeds into problems with food costs. When farmers who are using labour practices which they themselves may feel uneasy about cannot sell their crops and break even, that’s a very serious problem. The system perpetuates itself because farmers know that using ethical labour may not pay, that they cannot compete with farmers who are willing to use abusive labour practices, because there’s a limited market for ethically produced fruits and vegetables.

This market is not the fault of consumers. Not everyone is able to pay for things like produce which is produced ethically (and it’s worth nothing that ‘organic’ does not necessarily mean ethical). It’s the fault of a complex and broken food system.

I’ve been thinking a lot lately about farm subsidies and the numerous problems which go with them. I don’t think it’s possible to abolish the food subsidy system, because there would be too much resistance. But what if we could reframe it? If we accept that a certain amount is budgeted for food subsidies no matter what, could we use that money to incentivize ethical labour practices? Farmers who can demonstrate that they are using ethical labour could receive subsidies to help reduce the prices of their crops to make them affordable for consumers, thus making it possible for more consumers to buy ethically. Meanwhile, farmers who are not using ethical labour would not be able to access subsidies.